The Power Of Declaration

The Power Of Declaration

Tommy MacKay was approached by East Renfrewshire Council to carry out a research project of his choice with only two things to guide him: first, it was to be on the effects on achievement of raising pupil and teacher expectations; second, it was to be unique.

To do something unique meant by definition that no one had ever done it before. Thus the work on declaration was born.

A short time later he presented this plan to a large gathering of the Educational Directorate and other key personnel in East Renfrewshire:

‘We want to do something that’s never been done in the world before:

To raise children’s achievement levels by doing nothing different from what we were already doing, except…
…getting them to declare that they will do it.’ 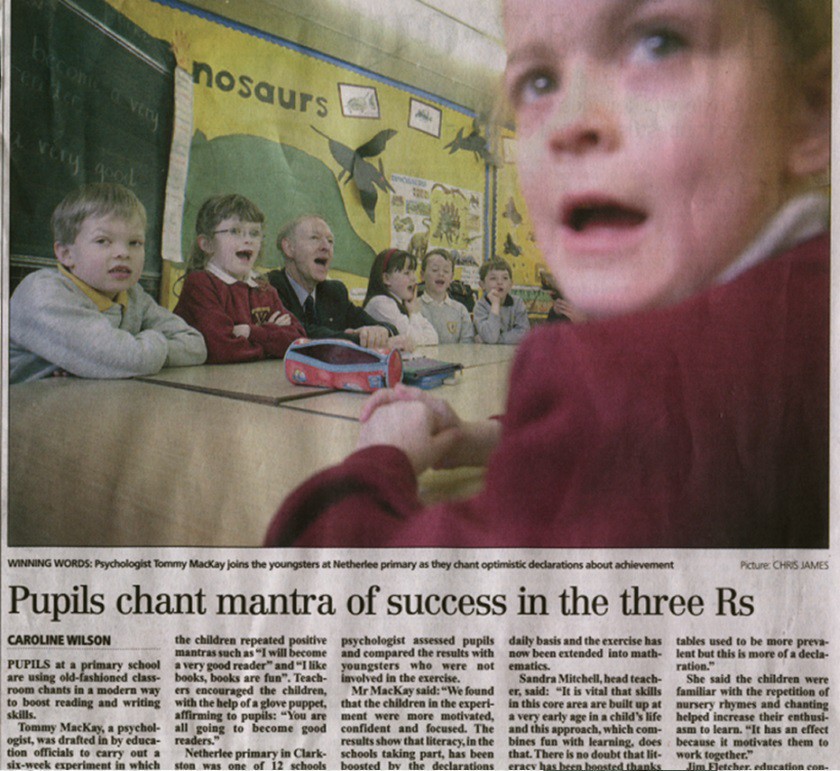 The idea seemed extremely improbable – and it was greeted with more than a degree of incredulity by many in the audience. But like many good ideas, it was a matter of taking something very complex – a vast body of psychological research in nine different areas – and turning it into something that seemed simple to the point of naivety.

The research was carried out with 565 children at nursery and early primary level in 12 educational establishments. In half of these everything went on as it had done before. In the other half the children had to make a bold declaration aloud three times a day that they would have higher achievement. With guidance, the children thought up their own declarations – often shouting them out as a whole class at the pitch of their voice.

Their achievement levels were measured before and after the programme. The achievement of the children who made the declarations went up significantly compared with those who did not. Not only that, but their attitudes became more positive.

Since then the work on declaration has been developed considerably. It has been shown to have transforming power when used both with children and with adults, not just for educational achievement but for life in general.